I have to tell you, I’ve been truly inspired by someone over the past week.

This man has been surrounded by a great deal of controversy over the past few years and he definitely has a lot of critics.  Heck, I was even one of them.  For a multitude of reasons.

However, after last Sunday, I now look at him very differently.

Tom Brady, the New England Patriots Quarterback (with a lot of help from his defense, his receivers and his running backs) engineered the greatest comeback in NFL postseason history and led his team back from a 25 point deficit in only about 20 minutes of play.

This happened on the biggest stage in ALL of sports.  The ratings showed that about 111 million people were watching in the just the U.S. alone.  Every play gets scrutinized afterwards because unlike baseball, basketball, and hockey championships- you only get ONE game to win.

The pressure to perform well is astronomical.

The Falcons had it in the bank.  They had dominated the Patriots for more than 2 and a half quarters and they were doing it in every way possible.  Pressuring Brady, bulldozing through the line, stuffing their backs and receivers for short gains, forcing turnovers and basically just manhandling this Patriots team that has often been called a dynasty.

After watching these 40 minutes of pure Falcons dominance, I (and most of the world) sensed that the Patriots “dynasty” was over and there was a new kid and a new team on the block.  Heck even the Falcons owner came down out of his sky-box and waited on the sideline with his wife while undoubtedly mentally rehearsing his championship trophy acceptance speech.

Despite this new found fire however, there was still the issue of the time.  The clock was ticking down and they would need a ton of big plays, a ton of defensive stops and a ton of luck to see the tides totally turn.  And that’s exactly what happened.

I almost couldn’t believe it at first.  I saw this Falcons team who had been an absolute wrecking ball for 40 minutes, start to get picked apart play by play by play.

It was shocking to say the least.

I had the opportunity to watch the replay on Monday night starting from the beginning of Patriots comeback and I saw it so differently having already known the outcome.  I got to reverse engineer the entire finish and see how one team rose up and another team folded.  I saw the pressure bring out the best in one team and I saw the pressure bring out the worst in another.

Knowing who you are, what you’re capable of, and not letting any situation steal that from you.  Continuing fight to the end despite mistakes, setbacks, uneven odds and pressure.  Continuing to work your butt off because you know that nothing is given, it is only earned.

One thing that really makes it clear why Tom Brady has gotten to that point is his maniacal work ethic.  The quote from a Sports Illustrated article documenting exactly how maniacal certainly sums it up well.

“This guy is year-round,” Brady’s trainer says. “No plays off. No days off. Everything is purposeful.”

Tom Brady follows a scripted life.  He has successfully created, implemented and consistently followed a plan that, at the time the article was written, had the next 3 years of his life mapped out in detail.

Exercise, diet, rest, game film, mental exercise, reflex training, body work, supplements, you name it.  Brady and his body guru have it all figured out.

Here are a few excerpts-

“Let’s start here: Brady is a quarterback whose daily schedule, both in and out of season, is mapped clearly into his 40s. Every day of it, micromanaged. Treatment. Workouts. Food. Recovery. Practice. Rest. And those schedules aren’t just for this week, this month, this season. They’re for three years. That allows Brady and Guerrero to work in both the short and long terms to, say, increase muscle mass one year and focus on pliability the next. “The whole idea is to program his body to do what we want it to do,” says Guerrero. “We don’t let the body dictate to us. We dictate.”

“That’s their system. From the outset the principles made sense to Brady, who had spent the early part of his career like most athletes. He worried about injuries after they happened. He focused on rehabilitation as opposed to preventative maintenance. He was, he says, guiding a plane 30,000 feet into the air without having prepared for mechanical trouble. He would stick his elbow into an ice bucket after training sessions because that’s what people did. “It’s systematic,” Brady says. “I was part of that system. You’re in it for so long, you’re fearful of change. You always got in the cold tub, so you continue to.”

“Guerrero challenged all of those notions. He showed Brady how the muscles in his forearm had, through lifting weights, become short and stiff and how that led to soreness when he threw. Together they worked to make those muscles longer and more flexible — “more like rubber bands,” says Brady, “so I can throw thousands of footballs and not worry.”

“In essence, after the ACL recovery, Brady placed Guerrero in charge of the second half of his career. “What if LeBron James got what I got? What if he trained how I trained?” Brady asks. “He really could play forever.”

Can you imagine how confident this type of preparation has to make Brady?

When he came the league he was one of the slowest, skinniest, weakest quarterbacks in the draft.  He was picked 199th and he spent his first season with 3 guys ahead of him.  He was not the “natural phenom” that many athletes are.

Heck look at this picture of him at the draft.  Does that look like the next great football player? 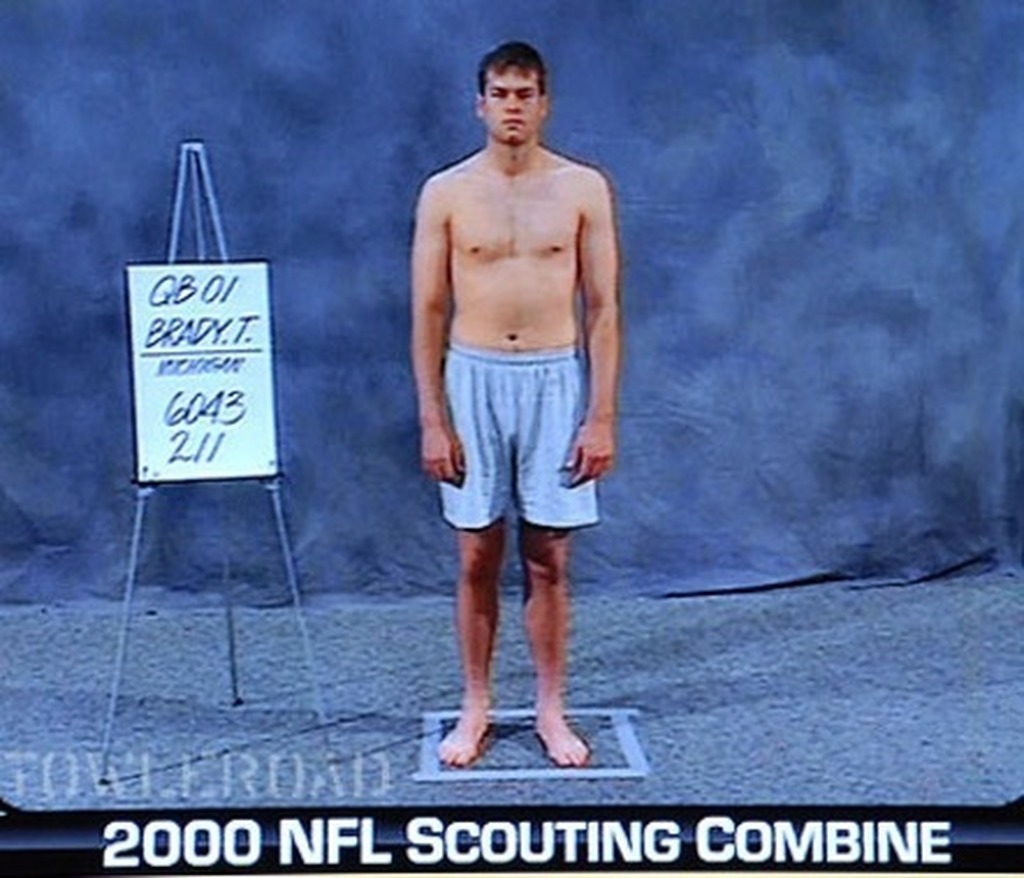 Tom had to work his butt off to get where he is and his confidence and his mental toughness are byproducts of the same training that it took to get his body and his skills in top condition.

Now of course, none of us can directly relate to Tom Brady unless we are trying to become a top NFL quarterback, but all of us can relate to the need to turn our natural ability into something great.

If you’ve been pushing yourself towards something, keep at it.  Even if you think you’re the weakest, slowest, most undervalued person out there- keep pressing on, keep being consistent and keep working your butt off.